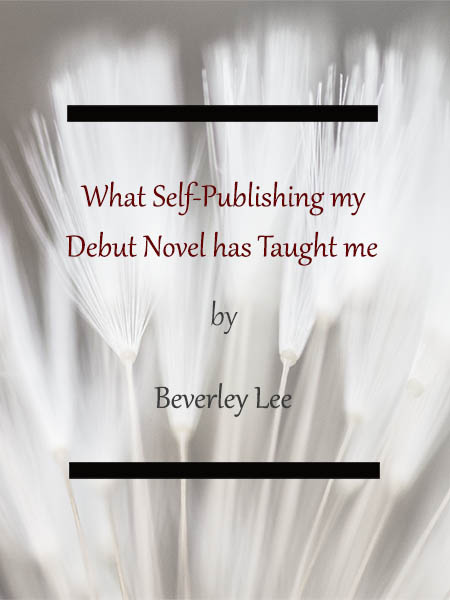 I’m really excited about this month’s guest post, because the wonderful Beverley Lee, author of The Making of Gabriel Davenport, is here today to talk about her experience of being a self-published writer!

For those of you who don’t know her – Beverley is a people watcher, a dreamer, a lover of nature and simple things. She collects feathers, picks up seashells and likes to run her fingers over old stone. There’s history there. Stories just waiting to be discovered.

She knows that the best way to grow is to support other people and she is passionate about helping other writers as they begin their journey – which is exactly what she’s come here to do today!

If you’re into dark tales with dangerous vampires and ancient demons, I highly recommend you check out her book! The title above takes you straight to Goodreads 🙂 It’s one of my favourite reads this year, and all the praise it’s received since its release is very well deserved.

Writing a book is hard. Marketing a book is even harder. That’s one thing I didn’t even consider when I first started out on my writing journey.

Traditional or self-publishing? The most important thing for me was getting The Making of Gabriel Davenport out there. I wanted people to read my story and to connect with my characters. At first I tried going down the traditional publishing route. I entered all of the pitch days on Twitter that I could, honing my book into an impossibly measly 140 characters, and hoping that someone would see the potential. I did get a few nibbles, but after consideration, they didn’t feel *right* and I’m a huge believer in gut instinct. I tried sending off the first three chapters to a host of agents and small presses, all with no success. I became one of those writers with a stack of emails that went unanswered. I’d given myself until the end of 2015 but I think I knew deep down that I’d have to try another way, as I had it professionally edited in December of that year. But I’ll be honest, the thought of actually going down the *other* route scared me silly!

I knew virtually nothing about self-publishing apart from the fact that you could do it through Amazon, so in a nutshell, I had to learn everything. I spent hours going through the pros and cons of buying my own ISBN’s (which I did), which book trim size was best for my genre, costing, what colour page to use. I lost myself in the forest of ‘how to self-publish’ websites. I bugged all of my friends that had done it before for advice and their list of pitfalls.

I learned that having a solid social media platform is incredibly important. I’ve had a pretty consistent Twitter presence since I first started writing Gabriel, and it would probably have never got past the first ten thousand words without the support of my writing challenge group. Having people around you that really understand what you’re going through, who you can rant at when nothing seems to make sense, and share those highs when everything is rolling along beautifully, is worth more than gold. I discovered Instagram in September last year, and through the #bookstagram community quickly found another support network of amazing writers and readers. Here people seemed to get me even more than on Twitter. They were genuinely interested in the progress of my book. As the time drew closer to publication they were the ones who shouted out my book baby, giving me the confidence to push it even further. They are my first readers, my first reviewers, and for that I’ll always be very, very grateful.

Some things I couldn’t do myself. Formatting and I just do not get along. I ended up outsourcing this, partly because I didn’t have the time or the patience to mess around with it myself. I’m a firm believer that even after countless revisions and beta readers’ eagle eyes, that a professional editor is a must. They *see* things you don’t even think about. I thought my finished draft was pretty tight when it went to my editor, but she found places where my enthusiasm for over explaining took the reader out of the story, and after changing what she’d highlighted, I could see the difference. I lost a lot of what I held close in some of these changes, but I learned so much.

It has all been a huge education, and I’m only just scratching the surface of how to market properly. Next time I will give myself more space at the end of the process. It was such a fine line between success and disaster with Gabriel. I didn’t receive my books from Create Space until the day of launch, or my business cards – both because I didn’t appreciate how long it would take to get errors corrected and then sent back. I ended up paying a lot to have both get to me on time, a cost I didn’t have to pocket if I’d allowed myself more leeway. I will make sure to have the book uploaded to Amazon at least two months before my launch date, so I can get the proof copy and look for errors and then get them ironed out, without giving myself a major dose of anxiety.

It’s not enough to have a well written and captivating story. You have to get it in front of the eyes of possible purchasers who won’t scroll through Amazon page after page. They want an immediate impulse buy – something to grab their attention in the 0.2 seconds that they give to each book. Categories. Keywords. Algorithms. Words that Hemingway never had to deal with, but a must for a modern writer to understand.

But if you asked me, would I do it again, the answer is a resounding yes! The sequel to Gabriel, A Shining in the Shadows, is due for release some time in the spring of 2017. The words ‘a glutton for punishment’ come to mind, but I wouldn’t have it any other way.

Are you a self-published author, or is it one of your goals for next year? What valuable lessons have you learned along the way, or – if you’re about to self-publish for the first time – is there anything you’d like to ask? Get yourself a tea, make yourself comfortable, and let’s chat!

For all other guest posts, take a look here.

For Cookie Break’s home page, have a look here.

Get a tea and a cookie, and let's chat! Cancel reply